Was a well known Italian mathematic and physicist. After his death in 1680 his work was published. It contained every design from his time, diving bell, breathing tube, submarine with airbags but above all the diving apparatus with an air tube with adjustable volume (inspired by the fish) would influence all later designs. The diver wears a helmet of cooked leather. He breaths in a leather bag that he takes with him under water as a artificial lung. The bag contains air under normal pressure. To compensate positive buoyancy the diver carried a 1 meter long cylinder with a device to change its volume. Pressure was not invented yet. This design would never have worked. After going just a few centimeters down the helmet would suck itself vacuum on the divers head and cause his death. 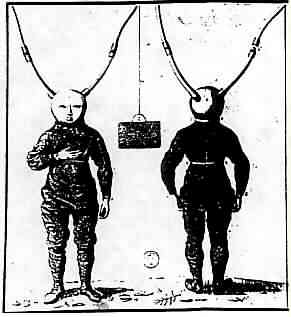 There is a document with the name "le plongeur du Chevalier de Beauve" dated 1715. The document gives a description and  a detailed drawing of a closed diving system where the helmet is attached to the diving dress. Exhaled air escaped through a second pipe. The helmet featured a breast- and back plate to prevent effects of compression. The suit was "open" to the middle. Lower part of the body, arms and legs where not protected from water pressure. 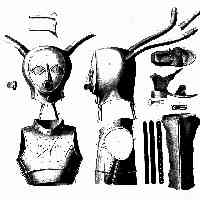 In 1783 the Frenchman Forfait hands in a proposal for a new diving suit at the French academy for Science in Rouen. His suit features a hard back and front side. Also the helmet is supplied with a candle. Suit and candle were never made.

Known to be the inventor of the "free flow" open diving system. In 1797 he developed an open diving helmet with two joints to inhale and exhale compressed air. His suit was connected to a large air tank that featured a adjustable piston so that buoyancy could be controlled. This gear appeared to be so hard to handle that he later developed a version with a smaller air tank. In 1797 a number of test dives were made. 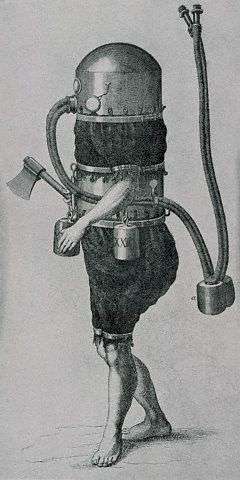 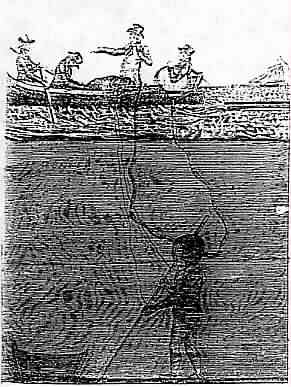 In 1825 William James enters the first practical proposal for a "self contained diving dress". It consisted of a copper helmet that was attached to a watertight suit that was sealed of at the waist and the wrists with elastical cuffs. Air was transported from a metal container around the waist to the helmet via a valve that was operated by hand. On the bottom of the container where weights to keep the diver down. The diver inhaled thru the nose and exhaled thru the mouth. From the mouthpiece a short pipe went up to the top of the helmet. The idea was OK but the time to be spent under water very limited.

Poor Charles Condert! He was, very likely, the world’s first successful SCUBA diver, but is completely ignored by history.

Some claim Klingert was first, but while Klingert (actually, his hired diver, F.W. Joachim) made a successful surface support dive in June of 1798, his design for autonomous underwater gear almost certainly never got wet.

Others claim James was first, based solely on his 1825 patent for two versions of autonomous underwater gear. But, again, there is no evidence that James’ rig was actually built or tested.

In the early 1800s many patents, especially from England and the United States, were reported and reviewed in popular engineering journals circulating on both sides of the pond. These journals were the Popular Mechanix and Popular Science of their day, reporting on fantastical new technology with the same "gee whiz" bent, and often publishing engravings that were illustrator’s fantasy, not eye-witness renderings. But these journals were unquestionably the source of many inventors’ inspiration and contributed to the similarity of ideas and methods springing nearly simultaneously in America and Europe.

The James patent was reviewed in one of these, the Journal of the Franklin Institute, in 1828. Shortly after, Brooklyn machinist Charles Condert fabricated a SCUBA tank from four feet of six inch copper tubing. The tank was bent into a semi-circle and worn around the small of the back, projecting to the sides, suspended by a harness over the shoulders. Condert made his compressor from a gun barrel and pumped into the tank, "as much air as he supposed would be required for the time he intended to remain under water." Fifteen cubic feet would be a reasonable guess. From a small hand-operated valve at the tank, a tube ran under the hip-length rubberized fabric tunic and up into the attached hood, made of the same material. Condert is reported to have considered an exhaust valve, but found that a tiny hole in the crown of the hood served quite well.