Bob Kirby one half of the original partnership of Kirby Morgan was a US Navy diver starting out in his career in the Navy as a welder, metalworker and diver. fter leaving the Navy, Bob became an Abalone diver and then undertook work in the newly discovered oil field patch off the coast of Santa Barbara. At the time of the beginning of the exploration work in 1963 the only way of diving to depths of greater than 250 feet (75 metres) was to use the Navy’s Helium gas system. This system used the inert gas Helium to replace Nitrogen in the divers breathing gas thus removing the danger of Nitrogen Narcosis. The helmets used were the US Navy Mark V helmet with a gas re-circulator appliance added. Excess carbon dioxide was removed by passing the expired air through a scrubbing canister filled with Natron which itself was harmful if it became wet. The scrubber unit or canister was attached to the rear of the helmet but the weight was so great it could only be used in a practical way when the diver was standing upright. In 1963 Dan Wilson revolutionised this method of diving by adding a demand regulator inside commercial Yokohama helmet thereby conserving as much Helium as the cumbersome Helium system used by the US Navy. Wilson along with his partners one of whom was Bob Ratcliffe later famous for the Oceaneering Rat Hat also designed and built a portable topside unit, a portable gas regulating box which replaced the tons of equipment used in the Navy system.

In 1964 Bob Kirby well know to everyone was approached by Jerry Todd of Associated Divers to design and build these new style lightweight re-circulator helmets and this is where the R Kirby commercial diving equipment business began. Bob’s first helmet was completed in a month and boasted a 50 lb weight reduction and the removal of the Natron scrubbing chemical which was replaced with Sodasorb. The first trial helmet was used by diver Ted Benton who descended to 300 feet for the maximum bottom time allowed. The trial was a success and a production run of 5 more helmets began. The helmets were modified from a DESCO sponge helmet.

Shortly upon completion of the equipment build a job was secured in Alaska for Associated Divers and all the equipment was shipped there. With no more work from Associated Divers Bob rented a workshop close by and began production of the R Kirby Helmet. The first helmet made from left over parts was built for Pete Brumis. The next helmet built was an air hat which Bob built for himself. Bob now changed his design and built all the helmets on a Yokohama breastplate. The bonnets were spun by Hummel Sheet Metal Works and Morse supplied the air control valves. Dick Quittner a skilled machinist made all the other hardware.

Other modifications were made and one helmet was made with one small port for a diver claiming to be working in water with absolutely no visibility. This helmet became known as Cyclops but sadly when it left with its new owner it was never to be seen again. Air and re-circulator helmet were ordered at a rate of one a week and steady production continued until saturation diving took over and the demand for heavy gear diminished sharply.

At about this time Bob received an order for four re-circulator helmet from Murray Black of Divecon International. The idea was that the diver would dress himself in the saturation bell and swim out to the job underwater. In order to make this possible there would be no breastplate and there by allow the diver to swim to the job often well below the point at which the bell was anchored. This use of semi heavy equipment was not favoured by other who had devised and built a fibre glass mask with a regulator which was easier to swim in.

A couple of orders followed and then Ocean Systems ordered a Gas hat which they quickly had copied by Yokohama Diving Apparatus of Japan.
At about this time Bok Kirby met Bev Morgan and after a brief negotiation Bev Morgan agreed to help design and build some fibreglass abalone masks then move on to commercial masks. Following the first month in which Bob and Bev worked well together an order arrived for 3 gas hats and then Bob and Bev became partners. The Kirby Morgan Corporation continued to design and produce the most advanced diving equipment available anywhere for three more years.

Many designs for equipment developed then, but not patented, were adopted by other manufacturers and are still in use to day. One of those being the adjustable demand system adopted by General Aquadyne and Scubapro. At that time also an improved air helmet was designed and developed which became known as the Kirby Morgan Commercial Helmet. It is interesting to note that the Partners gave Yokohama permission to produce both the Air helmet and the re-circulator helmet without asking for royalties.

The next design equipment was the Bandmask, designed to supersede the World War 11 design of the Jack Browne mask. Featuring a fixed hood with speakers and a rear full length zipper, improvements followed rapidly and the Bandmask was to be the first production model the partners developed. Next followed a swim helmet which was called a Semi Lite but not many were made. By 1968 the sales of the Bandmasks were increasing rapidly and a contract was won to build 12 specialised helmets of fibreglass for the Sea Lab project, The helmets were called Clamshell Helmets. Production which was still undertaken by the partners was becoming difficult to keep up with and in 1968 a merger was formed with Pacific Instruments to raise capital. Production of the Bandmask ceased by order of Pacific Instruments and so did the production of the Clamshell Helmet for the US Navy and just a few months later Bob and Bev were told the Company was to cease trading and they owed $20,000 with little to show for it.

In order to pay back Pacific Instruments Bev borrowed $20,000 from one of Bob’s first helmet customers and the loan was discharged. Bev continued to build band masks until 1970 when the rights were sold to US Divers and also completed the Clamshell Helmet production for the US Navy. Bob and Bev’s partnership ended in 1968 following the closure of the Company by Pacific Instruments.

In 1974 Bob and Bev formed Diving Systems International and their first product was a fibre glass air helmet. Then they were contacted by the Navy’s Experimental Diving Unit asking them to design and build a new neutrally buoyant swim helmet. They proposed their newly designed Air helmet but as this was not as specified it was declined. Divex made the designed helmet as specified by the Navy and Morse won the contract to build them. In 1976 Bob demonstrated the SuperLite 17 to the US Navy but it was to be another 10 years before they adopted the design. Bob’s association with DSI ended in 1980 and then he worked on several projects and in 1983 was engaged in the design of manipulator arms for a small manned submersible. 1n 1989 Bob was engaged in the filming of The Abyss to build 11 helmets and Backpacks. There were many complications which may not have been present if designing a helmet system for commercial divers rather than for a film set. Bob and James Cameron are still good friends. 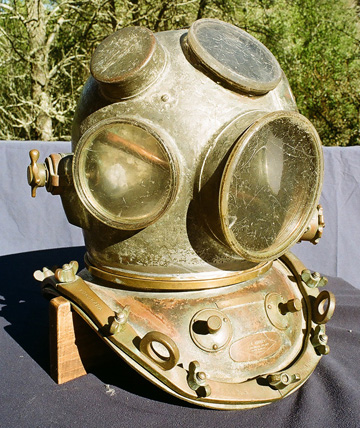 Above is a picture of the first helmet Bob Kirby built. It was
named ORVILLE as Bob greatly admired the early aviators
Wilbur and Orville Wright. 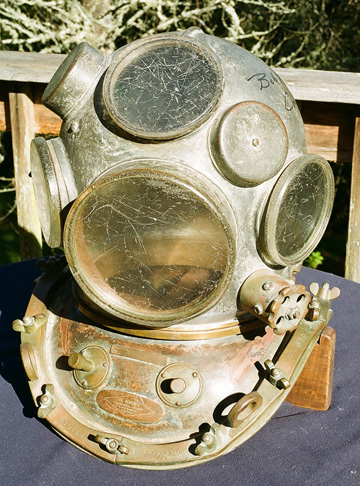 Orville bears the first style of three of the R Kirby name badges.
On the diver’s left hand side is the control valve known as the
West Coast air control. This style of valve was preferred by
divers working in cold water to the belly valve as the diver’s
warm expired air in the helmet helped to prevent the valve
from freezing. The helmet has four characteristic Plexiglass
windows and two large lashing eyes. 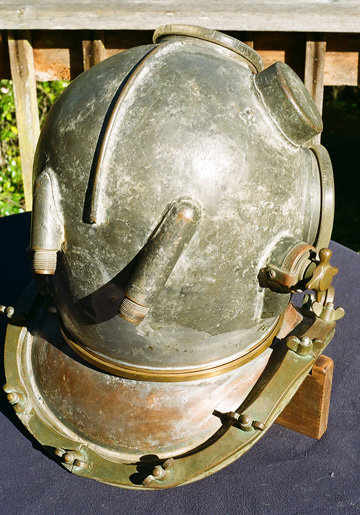 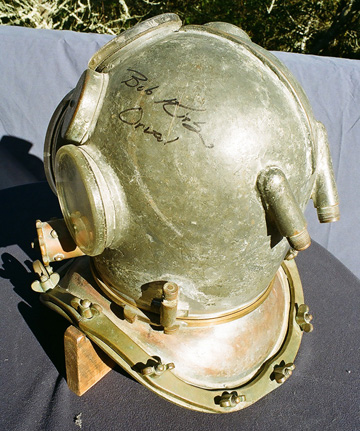 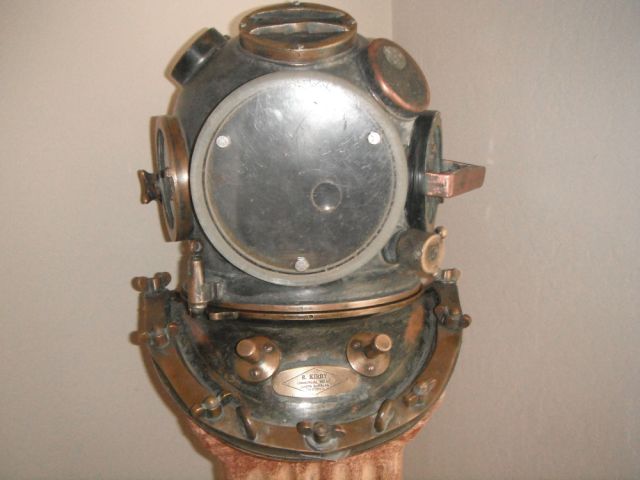 An R Kirby Air helmet similar to most of this design. The front port is made from Plexi glass, notice the small circle
which is a magnifying lens. There is a bracket on the diver’s left hand port on which could be mounted a camera or a work light. 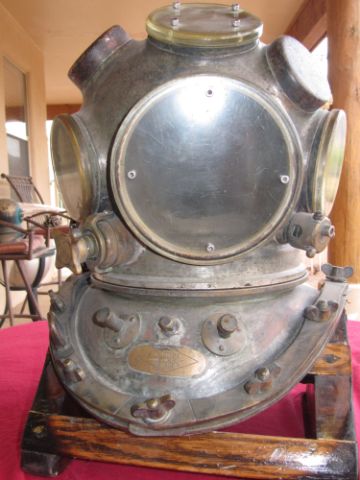 This Air Helmet was the only one produced of this style. It featured a Navy style
chin button and a double exhaust. This was a good helmet for contaminated water and
pipe penetrations. Note the attachment for a bail out in the centre of the breast plate. 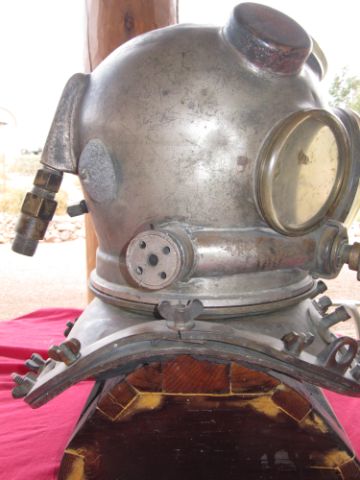 Side view of the double exhaust air helmet