Charles Person of Brazil was one of only three helmet manufacturers from the South American country. Brazil, the largest of the South American countries covers a vast area of nearly two thirds of the whole of the South Americas and is rich in mineral deposits and rare gemstones , particularly diamonds. The manufacturer Charles Person was primarily a maker of boat propellers and only a few helmets were made. He built both shallow water helmets and the traditional 12 bolt deep water or standard helmets also although even fewer numbers of these are known to exist to day. The country has over 3000 miles of coastline on the Atlantic ocean but also has many thousands of miles of rivers and lakes so it is not surprising there has been extensive diving activities here.

The country is subdivided into 26 states and located on South-eastern Subdivision to the west is the State of Minas Gerais. This was formerly known by the name of Minas dos Matos Gerais. Portuguese colonists named the state Minas Gerais (General Mines) in 1720 whilst exploring this region of Brazil in search of precious gems , gold and minerals. The capital city of this state is Belo Horizonte (beautiful horizon) a large city of some five and a half million people. To the Southwest of Belo Horizonte by 320 miles lies the city of Sao Paulo the home of the Helmet manufacturer Charles Person.

Mining began on the fertile alluvial plains alongside the rivers by using a large sieve device known as a saruka where precious gems and nuggets of gold were filtered from the alluvial sand. The richest alluviums were found to be concentrated in the river beds within its natural canal. The depths were only accessible using diving equipment. The equipment comprised of a copper helmet fixed to a copper breastplate. The helmet secures to the breastplate using 12 bolts and nuts . Between the 2 joining flanges a leather jacket was fixed forming a large air bubble in the helmet and the shoulders of the diver so long as he remained upright. A rubber hose connected the helmet to the rotary pump on the surface which was generally located on a raft or 'balsa'. A lead weight was hung on the front of the helmet and the rear ensuring negative buoyancy , the weights being some 25 kilos or 60 pounds in weight each.

Working without artificial light the divers devolved a technique of finding the fertile alluvium or cascalho by touch of the hands or feet or using a large wooden spoon like implement. The divers' tenders on the surface analysed samples sent up by searching for so called pathfinder or satellite minerals which could indicate the presence of a diamond. Some of these pathfinders were black tourmaline , cianite (aluminium silicate), rutile (titanium dioxide) ,red garnet, hematite(iron oxide) and ilmenite(titanium iron oxide). When a diver found a promising sample he would put it in a burlap sack that was raised to the raft above. This work was most hazardous because of the river currents and the underwater landslides.

To complete the process the cascalho or diamond fertile alluvium was cleaned and concentrated at a site called the lavatorio. After sieving, the heavier material remained
and this material was examined using a pencil like stick for diamonds. This operation was known as 'to write the cascalho'

It would appear from records that diamond mining was the main use for this type of helmet. Though with such an immense coastline and river and lake topography this type of helmet must have been used for other activities. It is recorded that these helmets were also used in Bolivia and Venezuela and it was on the River Caroni that the 172 carat diamond known as the Barrabus was thus found. Gold too was found here. The diving could be testing as the divers worked in depths between 10 and 150 feet.

Photos and information thanks to and courtesy of Ed Fogderud. 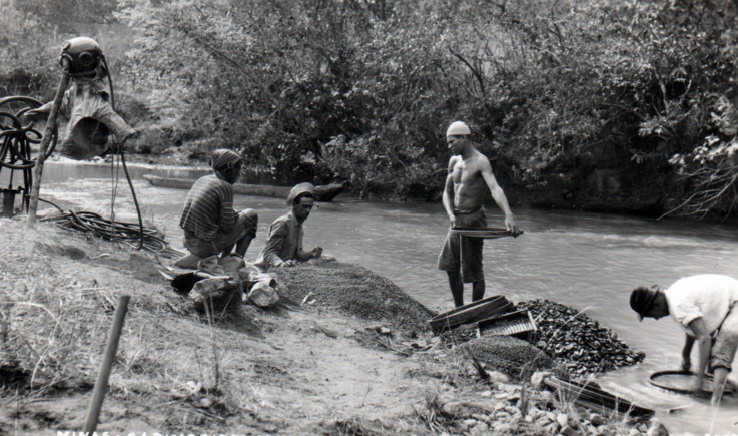 Alluvial diamond miners at work. The diver's helmet, jacket and pump can be seen to the left of the picture.

check out the person helmet in the Deep water section

check out the FORD Brazilian helmet

check out the ETERNE Brazilian helmet

Can you help with a contribution to the Brazilian Chapter of the Shallow water Section?