The helmet had a top view port to provide the diver with an upward view. The front view port, called the faceplate, was hinged. Like this, no tender could incidently drop a faceplate overboard ! On the commercial helmets they tested, the exhaust was at the rear of the helmet. This was a good spot: air bubbles would not block the divers' view. However, it was sometimes hard to operate the handle at the back of the helmet. So, the exhaust was moved to the right front side of the helmet and an external "banana" tube was applied to exhaust the air at the rear of the bonnet. Conventional 3 light helmets had air channels to prevent the windows from steaming up. On a 4 light helmet this was a bit of a problem: 2 side view ports and the top view port got an airchannel. A spitcock was put on the bonnet between the faceplate and the left view port so the diver could suck in some water and spit it against the inside of the faceplate in case it would steam up. The spitcock could also be used to "fine tune" the buoyancy.

Commercial 4 light Morse helmet from around 1915. This hat is a direct precursor of the Mark V.
It looks like the spitcock and the "sacrificial zinc" (an anti-electrolysis agent used to retard corrosion) have been removed.
The hat has the typical view ports and hinged faceplate. The corselet features two nipples for weights.
There is no banana-exhaust. On the rectangular nametag it says:
"MORSE DIVING EQUIPMENT COMPANY INC. SUCCESSORS.

The Mark V was used by the US Navy from 1916 till 1984, when the fiber glass Mark XII that was introduced in 1979, finally took over permanently. As we stated, only some minor changes were made to MkV in that period. Next to the Navy, a lot of commercial divers used (and still use !) the Mark V as well. Besides this the helmet is used by many Working Equipment Groups (WEG) including DWEG for fun, education and demonstration and thus to keep the memory of this great helmet alive.

The very first MkV appeared in the 1916 US Navy Diving Manual. It was a Morse. The oldest MkV helmet known in The World is a 1916 Morse Mark V helmet which is serial number 2204. It belongs to John Durham of Durham Diving Services

The helmet on the right is a 1918 Schrader, the one on the left is a Schrader that dates from 1943. The only visible difference between them is the eight point exhaust handle that you only find on hats from 1918 and older. It was changed to a four point handle on divers' requests. It allowed the diver to more easily adjust the valve and determine its setting. The other main difference worth mentioning here is that the World War 1 I breastplates were narrower and not as heavy as World War 2 ones. Pictures contributed by one of our viewers who would like to stay anonymous. 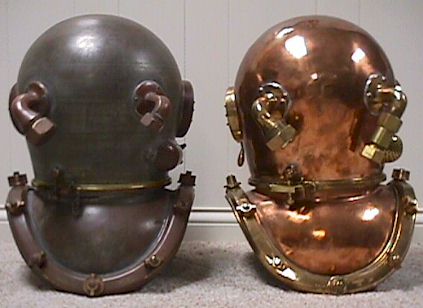 Since there are hardly any helmets left on the free market but there still is a demand, Morse and Desco produce new helmets on customers demand, according to US Navy specifications.

An absolute new Schrader hat from 1918.
Notice the eight point exhaust handle that you only find on hats produced during or prior to 1918.

A tinned Schrader MARK V from the WW II era.
Tin was used to prevent corrosion caused by sea water.

Consists of a spun copper dome with four heat-treated, sealed glass viewports. On the back of the helmet you find two elbows. The one on the left is the air inlet elbow, the one on the right is called the telephone gooseneck.

The bonnet is actually lowered in place about one-eight of a turn out of alignment, due to the interrupted thread on bonnet and breastplate. Then, while one tender holds the breastplate, the other one twists the bonnet into place. The mating threads engage to thrive the bonnet down tightly on the leather neckring gasket; this forms a watertight seal.

Bonnet and breastplate have a marking on the front. When these two markings are in line, the bonnet is placed exactly right.

All four viewports are guarded with protective brass grills. The glass is about 0.3 " thick.

In 1971 the US Navy changed the specifications from glass to acrylic windows for safety. (now you know how it is possible that you encountered a hat with "plastic" windows !)

See the MkV diver coming up!!