Method of communication between diver and surface

The traditional methods of communication between the diver and the surface was by an agreed series of pulls on the diver's life line. The diver and his attendant could signal to each other and could communicate very effectively. The first type of voice communication was achieved at the turn of the 19th century. This was achieved by using a rubber speaking tube which was devised from the speaker tube method used on ships for communication between the bridge and engine room . The device was not a success however and was quite short lived. At around 1920 Siebe Gorman were experimenting on a more efficient telephone system. The first system used a pair of speakers set into a cap which the diver wore, similar to that of an aircraft pilot. The transmitter or microphone was fitted adjacent to the front window. This system was superseded by a speaker-receiver device which was fitted in the top of the bonnet. It could easily be unscrewed and replaced by a quarter turn.
Alfred Graham and Robert H. Davis were then working on a more advanced system which allowed two divers to speak to each other under water and with the surface also.. The diver could call the tender on the surface by pressing a chin button which worked a bell or buzzer on the telephone box at the surface. This system was used extensively throughout the Royal Navy for many years. Another form of telephone was also used which employed a headband with 2 speakers and a receiver which was pressed against the diver's throat. The receiver was aptly called a Laryngaphone. 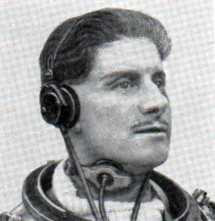 There were several ways of transmitting the sound to the diver but the best way was found to be to embed the telephone cable into the diver's breast rope.
Diver's telephones were notoriously unreliable. In remote locations they had to be powered by a series of batteries. The sound quality was often poor as it had to compete with the compressed air entering the helmet. The inside of the helmet was often damp which further impeded the sound quality. The diver could if required shut off the air temporally to hear the attendant on the surface. Often the cable was required to with stand heavy strains and twisting forces. Sometimes, however divers would blame these potential failings as an excuse to ignore the tender who often asked unending questions of the worker below. Making good connection was most important and the 3 pin plug was replaced by a 4 pin plug with an extra spade pin for an additional earth.

Can you contribute an item of telephone equipment to this section?

Please email a photo and a description to info@divingheritage.com