Carl grew up in Harding County, Kentucky as the son of a sharecropper. As a child he already loved the water and many times he went swimming instead of going to school. He finally quit school when he reached the 7th grade. He took a job in a service station. In 1948, at the age of 17, Carl joined the US Navy as a steward. He soon found out that he wanted more and discovered that he had to further his education.

Carl wanted to become a Boatswain's Mate and entered the Beachmaster unit. He qualified to perform shallow water dives there. He liked his new job better than the old one but felt there was still something missing. While on board the aircraft carrier Tripoli during the Korean war, he found out what that was. As he watched the Navy divers from the deck of his ship he dedicated himself to become the first African-American Navy deep diver.

After he submitted his request to go to diving school, he was met with a lot of negative comments. The personnel officer told him the navy did not have any "colored" deep sea divers. "The Navy's about ready to have one!" Carl replied. It took him several requests but finally, in 1953, he was enrolled in the deep-sea diver program. When he arrived at Bayonne the training officer assumed he was there to be a cook in the mess hall.

Life was not easy at school. Some officers and instructors tried everything in their power to get him of the program. 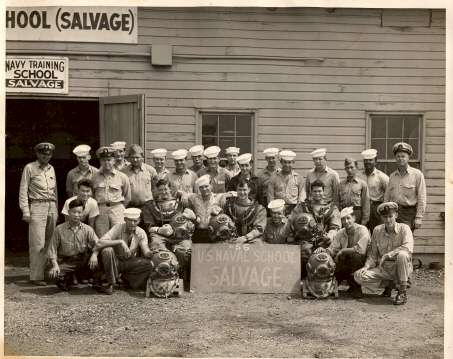 But Carl had different ideas. In October 1954 he passed the US Navy Ships Salvage Diver’s school. 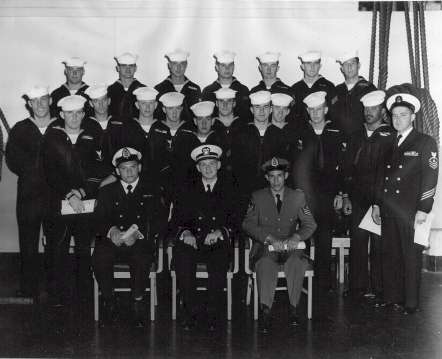 Life as a salvage diver

After graduation, he returned to his ship, the aircraft carrier Tripoli. Three months later he was transferred to the Salvage and Rescue ship Opportune. He loved his live in the Navy and as a diver.

But he wanted more. He was not satisfied with air diving - generally not operating at depths greater than 285 feet. After 7 years he applied for first class diver training at US Navy Deep Sea Diving School in Washington D.C. He did not make it. The diving was very heavy but not the problem for Carl. It was the theory of diving: physics, medicine, buoyancy, salvage techniques. He enrolled in the US Armed Forces Institute and worked for 3 years to master the math, physics and chemistry needed - receiving his high school equivalency. Returning to the school he graduated third in his class. 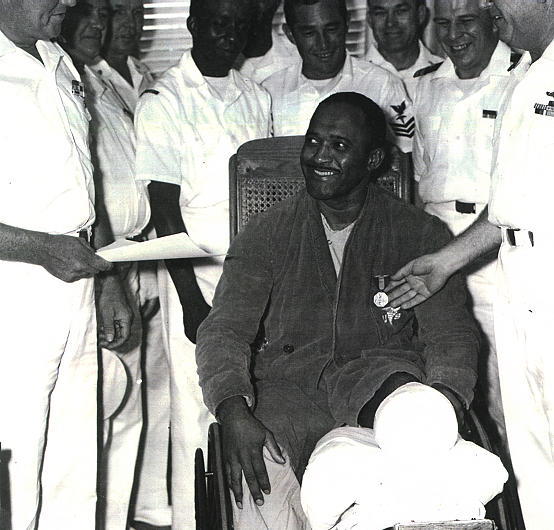 After the amputation, Carl was decorated with a the Navy and Marine Corps Medal for heroism in saving lives.
Photo courtesy of Philip Brashear.

Doctors removed his leg from the knee down and he was transferred to Philadelphia Naval Hospital where he was fitted with an artificial leg. From there he was sent to Portsmouth Naval Hospital, where he was to await his discharge from the Navy in March 1967. But Carl had other ideas. He only wanted to do one thing: DIVING. He sneaked out of hospital and went to second-class diving school in Norfolk. He wanted to prove that he could still do his job. At school the instructors let Carl dive in a MKV rig several times. This all had to be done secretly. They took many pictures they wanted to show Carl could stay in active duty. 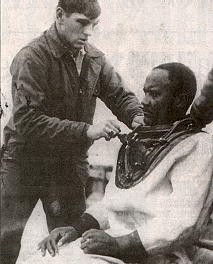 One of the pictures from this period.
The doctors were not convinced in the beginning.
Photo courtesy of Philip Brashear

After seeing the photos the hospital was still determined to process Brashear out of the Navy. By using several "disappearance tricks" Carl bought enough time. Someone high up in Washington saw the pictures and wanted to test Carl. He was ordered to 1st class deep-sea diving school in Washington to put up a demonstration. the tests were extremely heavy. Carl went down in a MKV rig every day for a week and they made him walk around on the surface in a complete helium rig weighing 290 pounds!

The doctors were convinced. In 1968 the decision was made that Carl could stay on active duty. He was ordered to second class diving school in Norfolk. He remained on active duty for 12 more years and 5 duty stations. In 1970 he became the first black US Navy Master Diver !

Eventually he retired from the Navy in 1979. Carl Brashear passed away on 25th July 2006, of respiratory and heart failure at the Naval Medical Center in Portsmouth, Va. He was 75. This is the complete resume of Master Chief Boatswain's Mate Carl Maxie Brashear, USN, Retired. http://www.history.navy.mil/faqs/faq105-1.htm 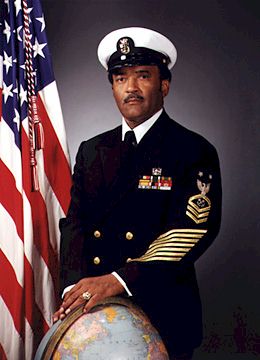 The film industry also got interested in the amazing story of this "positive attitude" guy. In the fall of 2000 the 60 million dollar movie "Men of Honor" was released about Carls' professional and private life. Cuba Gooding Jr. stars as Carl Brashear. Robert de Niro is Billy Sunday. Please note that Billy Sunday is a fictional person. He is a composite of at least three different people Carl met in the past. 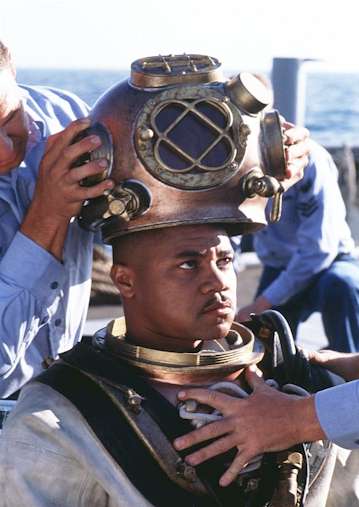 Tending Cuba Gooding Jr. The helmet in this picture is a Desco MKV breastplate combined with a Desco commercial bonnet.
The film directors did not want to use a MKV bonnet because the divers' face could not be seen very well through the small faceplate (!)
20th Century Fox photo.