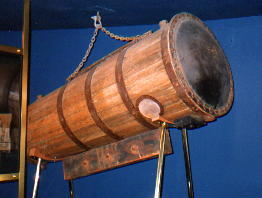 The first guy that came up with an idea was John Lethbridge. In 1715 he introduced what he called the diving machine. It was a wooden barrel in which the diver lay on his back. It had a round window to look outside and there were two holes to stick his arms out. Oiled leather cuffs around the upper arms formed a almost water proof seal. After the diver entered the machine the lid was closed (with an leather gasket) and the diver was lifted overboard by a crane. Line signals were used for communication with the surface. At certain intervals during the dive the diver was brought up to the surface to renew the air in the barrel with bellows. Lethbridge used his diving machine in depths up to 22 meters. Remember that the divers body was in a one atmosphere environment but the arms suffered from the outside water pressure. In great depths the arms suffered from this pressure. Lethbridge was very successful with his gear. He worked for a Dutch salvaging company for 9 years and recovered a lot of silver from a sunken vessel.

The problem with the Lethbridge gear was that the diver hardly had a possibility to move. This is something that has challenged inventors from that day on until today. The first guy that designed a suit with real joints was William Taylor in 1838. The suit was never actually produced. Taylor designed the joints as leather pieces with rings in the shape of a spring (known as the accordion joint). Hands and feet were covered with leather. Taylor also designed a ballast tank to the suit that could be filled with water to achieve negative buoyancy.

As you have seen in the "Going Deep" section Haldane played the most important role in the knowledge of effects of high pressure and decompression. In 1906 the US navy asked him to help them out with researching this subject. Haldane and his team finally came up with staged decompression tables. The basic principles of these tables are still relevant as of today.

The other big problem that divers had with nitrogen under pressure was the "nitrogen narcosis". It makes divers feel lightheaded and slightly drunk. The problem starts at different depths for every diver (like every man needs a different amount of alcohol to start feeling drunk) but usually at about 40 to 50 meters depth. In the early days of diving scientists knew no way to solve the nitrogen problem (in fact: today we still not know all about the problem) since other breathing mixtures were not invented yet. So, to reach greater depths inventors kept focusing on the development of armored suits.

Many guys did their best but most efforts failed. Most of the problems concerned the joints. They had to be watertight and had to stay movable at great depth (great pressure). Most designs failed on both aspects.

Between 1880 and 1913 several designs were introduced to the public. Some looked a lot like each other and they all had the failing joints in common, and many of them never touched water.